Santanu works in a finance office working with Oxfam India and loves to travel and meet new people and see new cultures. He has been a father for almost four years and five months and life has changed ever since. Since the arrival of his son, spending time with him is the most important thing for him. 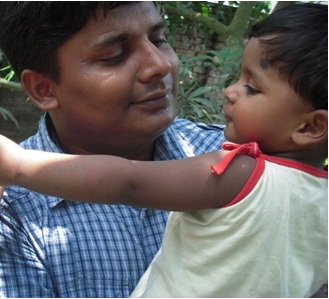 The best thing about being a dad is that I have become a better human being. I see and realise things in myself that I don’t want in my son. It’s like having another opportunity in life. It’s the best thing to have happened and with each passing day, I realise it more. I didn’t have an extreme kick start relationship with my son, as I lived in another state, but now being together for years, he has become my strength and weakness at the same time.

I grew up in a small town in West Bengal, India to a conservative, yet very liberal, Bengali family. In a country where women are treated as objects, I’m glad I’ve had a different upbringing. My elder sister was the apple of my father’s eye and my brother and I were often jealous. For me, though, it was never learning to respect women. It was just the way we were brought up. It’s the way men in the family related to women, spoke with them, participated with them in decision making. Our house in the village was one of the different ones, where meals were equally shared and not divided between girls’ meals and boys’ meals, which would have more of the share and the best parts of the fish, chicken, or egg. I have often seen my father stand up against child marriages and dowry marriages, and women subjected to domestic violence. I was too young to understand these things but I admired him for standing up for what is right. I learned there is nothing manly in abusing women; rather its better being human beings who respect one another.

It’s like two sides of the same coin. If one has to address any issue, it should be with both sides. And true, why should it be a women’s issue? I am a father and it’s important how I’m behaving with others because I know my son is watching. The process is not always formal. Mere insignificant things can bring about change in the mindsets of children.

Being a father of a four and a half year old, I pay special attention when he watches television or listens to Bollywood songs, where women are objectified and consciously change channels. As a dad, it’s important that we treat women the way we want our daughters or sons to be treated when they grow up. Standing up for them in whatever way one can, can leave a lasting impression on children. We should remember being born a girl is not a crime and not a gateway to be victimised or abused. These issues are not just in developing countries like India, but all over the world, and its growing and changing from day to day. Delay in our actions will only cause delay in our solutions.