My name is Bala Sasetu. I am a lawyer by training and a public servant by profession. I am a Christian. I am happily married and the union is blessed with two sweet daughters; Kayla, aged 3 years, 7 months, and Viela, aged 9 months.  I am a family focused person, a persona that drove right to the doors of Family Worship Centre, Abuja, where I worship and serve as a Home Cell (Care Group) leader.  My hobbies include but are not limited to travelling, watching TV, and listening to good music. 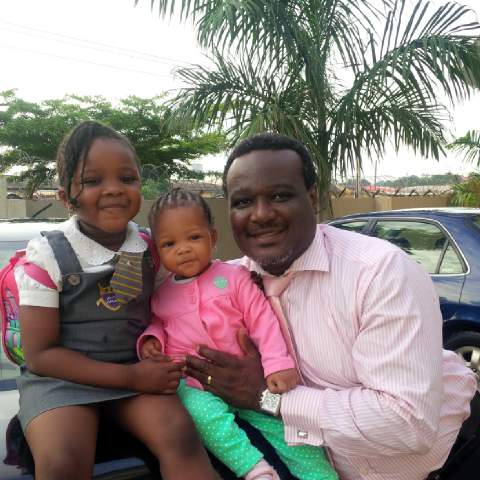 The best thing about being a dad is the fact that I see not only a replica of myself but an opportunity to make a better me.  Nothing prepared me for the experience of being a dad so from the moment I set eyes on my child, the avalanche of emotions that came upon me from that moment onward were just awesome.  The responsibilities are challenging sometimes but I would not trade being a dad today for anything on earth. It also makes me understand how God feels about me as His child.

My father, like every other person, was not perfect when I was growing up but he was a man, indeed, he still is.  He adored our mother and tried to express it the best he could.  He knew how to handle affairs in his home and how to take up the challenges of fatherhood whilst not interfering in my mother’s need to be a mother.

He was not bossy and a terror around the house, and understood the place of dialogue. My father only needed to mention something once and it stuck.  Such is his influence on me.

I believe that charity as they say begins at home. The way fathers treat mothers at home will go a long way in determining the premium boys will place on women in their lives. If they grow up seeing their mothers treated like property, they will eventually see women as objects for ownership.  If their mothers were abused, their wives more often than not would be abused, too.

I agree that there could be cases of reverse reaction where children who saw their mothers suffering violence developed compassion towards women and treated them with respect, but such cases are extremely rare.

Fathers owe it to society to treat their wives with respect so that their children do not carry on the trend of violence. Fatherhood is not just being a father, but also teaching boys to be gentlemen and responsible fathers.