I’m from Cadiz, Andalusia, Spain. I am 40 years old and have three girls and three boys. Four of my children are from a previous marriage. I was trained in matters relating to education and communication and I am currently working to develop employment policies for the Andalusian government. I am also empowering parents and others to express caring to friends, family, in groups of men, including sports groups and parenting groups. Today I am 40 years old and have been a father for ten years. You can read many of the things I have written at http://joaquimmontaner.net and http://quimosavic.wordpress.com. 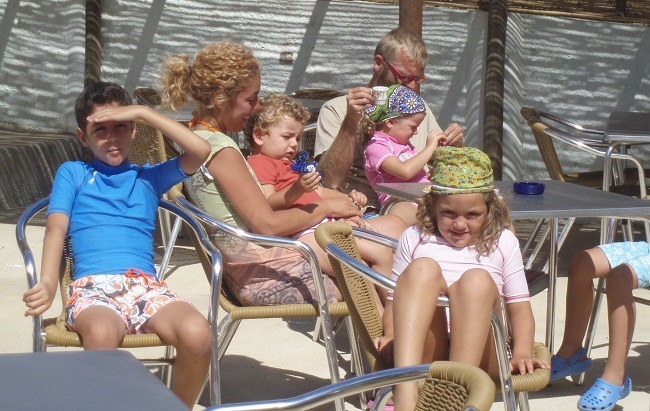 And I’m learning every day from them, and with them. I have realised that most of my life has been based on false assumptions and fallacies. I am transforming from a man into a real man.

Caring for others brings out the best in us. I have to stop putting my desires and my instincts first. I have to be extremely patient, to live with illness, to interact with many people with whom I share little or nothing, except being a parent or living in the same space.

Being a father changed me into someone more like my father. He is a respectful, loving, and wise man, and I value his ways more with each passing day. He taught me to allow people to make mistakes as they improve. He showed me the importance of being respectful of other people, be they men or women.

In my father’s generation, men had to be breadwinners. He did it very well, but all the time he wasn’t working was spent with my brothers and me. He provided support and assistance so we could live freely and independently. Today he continues to apply these principles as he takes care of his grandchildren.

I want my male children to be like my father. If they have children, I want them to be active parents. Just as I have done, I want them to offer themselves twenty-four hours a day, seven days a week, so their children can see who their parents are and know they are there. My children are internalising good parenting by seeing it in me and my father.

I want my boys to realise that girls are their equals. I encourage them to observe and analyse other realities. When they are older, they will care about their homes and who lives there. They will share tasks, including childcare responsibilities. It is often a battle to get them to do the household chores that the girls do.

We face a gender gap that needs to be corrected right now. Men have to care in ways other than breadwinning. Their roles are changing, but the presence of real men who are not afraid to love and to care for others will influence men who want to change.

The behaviour of parents is the strongest direct influence on the behaviour that children will exhibit as adults. Living and cohabitating with pro-feminist parents and other male role models who support equality between men and women will influence children’s adult lives. In later years these children may support the fight against gender violence and work for equality between men and women.

Engaging as many male children as possible will generate changes in relations between men and women exponentially. Relationships will then be based on respect and proper treatment of each other.