Our 20th Survivor Stories interview is with Giovanna Ibarra from the USA.

TRIGGER WARNING: The first two Q&As in this interview may be distressing for some Domestic Violence and Rape survivors.

Giovanna Ibarra is an organiser and writer with over five years of experience in management and coordination of creative campaigns and communications for nongovernmental organisations. She is a survivor of rape and domestic violence who turned her experience into creative campaigns involving music, poetry and art aimed at raising awareness about crimes against humanity, human trafficking, modern day slavery, and violence against women. She has recently been doing victim and survivor advocacy in Mexico. 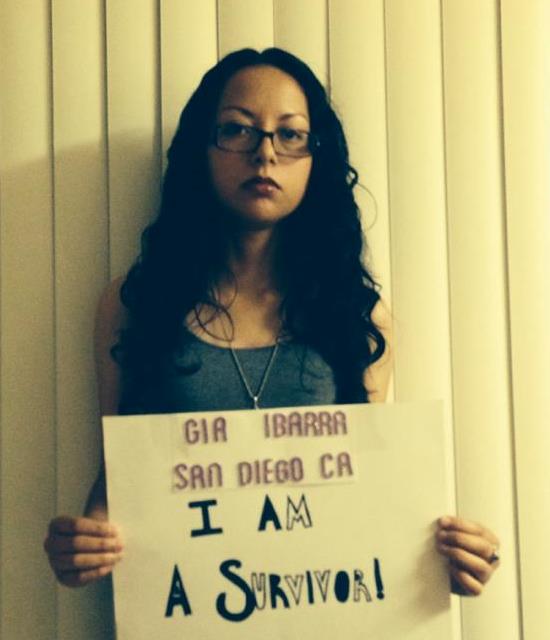 As a child, I was molested – first by a neighbour, later by close family members. When I decided to speak up about each of these incidents, I was not believed, and was told not to mention the events again.

In my late teens, the night my boyfriend raped me at knifepoint was when the coercion, manipulation and daily abuse began. His violent rage perpetuated regular incidents of physical, mental and emotional abuse, torture and rape which ended with me landing in the ER three years later. The police reported the gun he used to attack me was never found in the vehicle – they said I imagined the weapon.

I attended his sentencing on my own. The threats he made by phone were not counted against him during his trial. He was ultimately sentenced to only two-and-a-half years instead of ten through twenty five years for kidnapping and aggravated sexual assault with a weapon.

As I walked out of the court room that morning, an officer said to me: “You’re one of the lucky ones, you should be grateful even for a short sentence.” It took me many years to understand what he meant.

My abuser wanted to end both our lives through murder-suicide. However, he passed out in the driver’s seat from a heavy drug and alcohol overdose. I managed to sneak out of the car and call the police. Most of the officers who turned up did not believe me but one officer realised that I had been raped, was pregnant and had begun to bleed internally. That officer drove me to the nearest ER. “He saved your life,” the doctors at the ER said. ‘Had you arrived just thirty minutes later, you would have both died.”

After that my abuser was jailed, I was eventually forced to move to California on short notice, leaving behind everything and everyone I knew in Texas due to continued threats to myself and my family, including what could have been another attempted kidnapping. The officer investigating the case was unable to locate the van the kidnappers used and recommended that I move out of the state for my own safety.

Initially I was in denial and shock. As time went by, I began to fall into a severe depression and dissociation as a way to cope with everything. Then I met the late Steve Graham, the founder of ACT (Against Child Trafficking), who taught me that we can turn our suffering into positive action. Giving back to society, faith in God and music sustained and healed me. The support of my family and close friends helped me to slowly rebuild my life.

I also became my own victim advocate after the Texas Department of Criminal Justice refused to grant a new restraining order that could be used in California if needed. They said I was on my own and in charge of my own safety. My advocacy led to several months’ extension of my abuser’s prison term in addition to receiving an apology over the phone from the director of deportations at the Texas/Mexico border for not having checked for prior incidents of violence committed by my abuser. Their mistake could have cost me my life.

I have since found ways to help others through creative advocacy.

To young women who are dating someone who they feel unsafe with: Listen to your intuition and leave the relationship before it gets violent because it often does.

To the women already in a manipulative or coercive and violent relationship: Ask for help immediately. Remove yourself from the relationship, from the environment you are currently living in, and place distance between yourself and the abuser. Don’t be afraid to let go and never look back.

Educate yourself about abuse. The mistake I made was my lack of education and awareness about the issue. The Pixel Project offers more information on the signs of an abusive relationship and ways to escape and receive support.

Ending violence against women is a cycle that requires understanding that women and girls have the right to life, health, education and basic life skills, mentoring and support.

The real work begins at home, in schools, and the community to educate young boys and girls to respect and value one another. We need to teach at-risk girls and women about the signs of an abusive relationship in schools, at the local clinics they attend, and wherever they may otherwise be able to receive support.

We also need better training for police and first responders that still believe that a woman needs to look abused or display certain signs in order to receive support in order for an arrest to be made.

The Pixel Project provides women and girls worldwide with access to vital life-saving online resources and information. I myself learned about coercion and domestic violence through the Pixel Project’s website.

Their founder Regina Yau and all-volunteer team have supported my healing journey through their online activism campaigns to educate the public about violence against women while providing positive and empowering messages for millions of survivors. I have also volunteered with Pixel Project to support their Music for Pixels campaigns.